Like a continuously broadcast radio signal, your Conscience can reliably advise you which thoughts to think, words to speak and actions to take that will enable you to live your life in freedom. Yoga Science calls this invaluable function of the mind buddhi, and early Christian traditions called it the Holy Spirit or the Holy Ghost. In the movie, “Pinocchio,” it was named Jiminy Cricket. Everyone has a Conscience. It’s one of four functions of the human mind. But when we don’t use it regularly, its quiet voice gets overpowered by the more insistent voices of the Ego, Logic-Senses, and Unconscious. Although their advice can be helpful, it can also prove unrewarding or painful because it’s based on only a limited perspective.

The Conscience, however, is the only function of mind with a panoramic view, the unique ability to discriminate objectively, and decide appropriately what’s to be done and what’s not to be done. That critically important, far-reaching power is available to every human being and operates as a mirror. The Conscience can access unerring intuitive wisdom from the Superconscious Mind, and reflect that Perfect insight into our Conscious Mind. When we routinely let the Conscience be our guide, we learn by personal experience that what it says is true. The only question that remains is: Do we have the willpower to align our thoughts, words and actions with the wise and good counsel of the Conscience.

The idea that the Conscience can reflect infallible wisdom from the Superconscious Mind is not a figment of the imagination. This Superconscious Mind is real, the source from which Albert Einstein saw mathematical equations, and Paul McCartney hears beautiful melodies. Albert Einstein himself clearly stated that, “A problem cannot be solved on the level at which it appears. It must be solvedon a higher level.” The “higher level” that Einstein referred to is the intuition brought into our Conscious Mind through the Conscience.

But here’s our challenge: If we continue to accept the inflated promises from the culture, senses, unconscious habits and ego, without seeking the wise counsel of the Conscience, we only guarantee ourselves future forms of dis-ease or pain. The only way to know for certain what’s to be done and what’s not to be done in each moment is to follow the wisdom of the Conscience. When we let the Conscience choose our thoughts, words and deeds, our lives are definitely more healthy, happy, creative, and productive, and more free of stress and pain.

Creates “Likes and Dislikes” and assumes responsibility for self-preservation

The Ego’s primary responsibility is preserving and protecting our individual mind-body-sense complex. Motivated by that important mission, the Ego narrowly defines choices in terms of various forms of “likes” and “dislikes” such as: good or bad, praise or blame, winning or losing, pleasant or unpleasant. The Ego’s insistent voice can be valid and useful. We all know, for example, we need a healthy ego to skillfully drive a car. But in certain situations the Ego’s inherent biases must be overruled. Left unchecked, the often-wrong but never-in-doubt Ego can waste a lot of our energy and creativity chasing the nonexistent gold at the end of every rainbow.

Seeking happiness and security, the mind’s Logic-Senses function employs the organs of sight, taste, smell, hearing and touch. The senses quite spontaneously expend our creative energy because it is their nature to do so. They scour the world for anything that delights or promises safety. Then, taking its cue from each suggested thought, desire, emotion and concept, this Logic function continually asks the question, “Should I do it, or should I not do it?”

The Unconscious portion of the mind is analogous to a computer’s hard drive. It’s a reservoir of all our habit patterns, including both those that serve us well and some that don’t. It’s a storehouse of information useful in fulfilling all the desires and concepts the Ego has deemed essential to self-preservation. 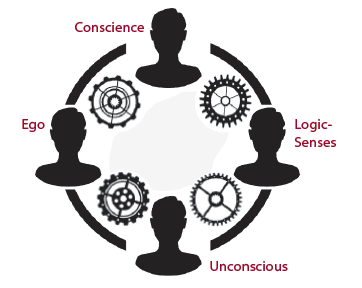 The Four Functions of Mind To Make the Best Choices & Outcomes

With the information collected from the Ego, Senses and Unconscious Mind, the Logic function of the mind presents two possible choices for consideration. It begins by saying, “You have two basic alternatives. There is alternative A, which will probably result in consequences one, two, three and four, and there is alternative B, which will probably result in a different set of consequences one, two, three and four. Kindly make a decision and take an action.”

After the Logic-Senses function of the mind concludes its monologue on alternatives and consequences, it waits a bit for our decision. If none is forthcoming, it automatically begins again. “You have two basic choices: alternative A with certain consequences and alternative B with certain other consequences. Have you made a decision yet?”

The relentless repetition is at first annoying, then frustrating, and eventually, exhausting. The doubt and indecision play on like an old broken record, and this inability or unwillingness to make a decision based on the available information is a major cause of stress in our lives.

The Logic of the mind works like a computer. No matter how sophisticated and swift its operation, the computer is always dealing with one solitary question: yes or no? one or zero?. The cumulative contributions of the Ego, Logic-Senses, and Unconscious are vital, but as with the computer, none of these functions of the human mind have any capacity to decide what’s to be done, and what’s not to be done. That work is the exclusive purview of the Conscience. Now comes the really interesting part.

When you begin to follow the advice of Jiminy Cricket, and “Let your Conscience be your guide,” you will undoubtedly be asked to give up a few old habits that conflict with your own Inner Wisdom. But, don’t take on too much too soon. Trying to tackle powerful, emotionally charged habit patterns right away would definitely not be kind to you.

Instead, choose just one seemingly insignificant old habit that would be relatively easy to give up. Perhaps you’ll let go of a second cup of coffee in the morning, or half a cookie with lunch. Maybe you’ll give up snoozing that extra ten minutes in the morning, or the habit of not brushing your teeth after every meal. Remember, if your experiment is easy, it will be right. And if it’s right, it will be easy.

Step by step, as you let your Conscience be your guide, you, and all four functions of your mind will reliably experience the pleasure and reward of doing what’s to be done, and not doing what’s not to be done. As you more frequently let the Conscience be your guide, you’ll be creating the new habit of trusting and employing the Conscience, and as a result, your entire mind-body-sense complex will feel better physically, mentally, emotionally and spiritually. And the world will benefit as well.

But the undisputed proof of that bold statement can only be discovered through your willingness to do the experiments.

Experiment Every Day Using Your Conscience 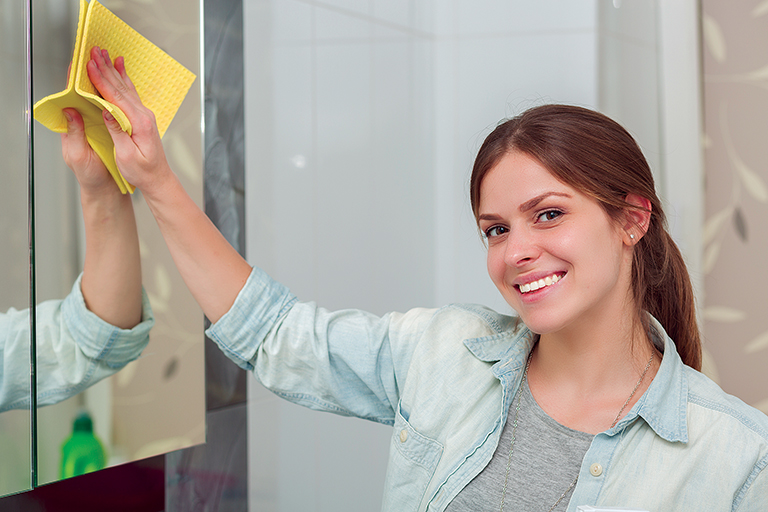 Unless a mirror is cleaned regularly, dust and debris accumulate on its surface and obscure the mirror’s reflective quality. Similarly, when we don’t establish and maintain the habit of using our Conscience regularly, its ability to reflect Inner Wisdom from the Superconscious mind is compromised. In such cases, the Conscience still retains the power to discriminate, determine, judge and decide, but without its access to Superconscious wisdom, only the relatively loud, and insistent voices of the Ego, Senses and Unconscious mind can be heard and considered. As a consequence, the Conscience will still make the final decision of what to do and what not to do, but its decisions will be made on the basis of limited and possibly faulty input. However, each time you use your Conscience, you’re cleaning the mirror that can guide you in every relationship and circumstance.

One of the most meaningful ways you can personally experience the benefits of Conscience Month is to experiment using your own Conscience when deciding which thoughts to think, words to speak and actions to take. Remember, your Conscience knows that not everything you “like” is good for you, and that everything you “dislike” isn’t always bad for you. So begin by choosing to experiment with small, relatively easy decisions, and within hours you’ll be feeling positive about yourself, more self-confident, self-reliant, and grateful for the love and kindness you are offering to yourself and to the world.

Here are a Few Easy Experiments You Can Try.

Leonard Perlmutter, founder and director of the American Meditation Institute, discusses the Four Functions of the Mind.