We rarely examine our most closely held concepts. Every day we deal with issues involving family, business, technology, and morality, knowing that when we need to enlist a certain concept to help us answer life’s questions it will come forward from the unconscious mind. But are all these concepts we’ve stored and employ really reliable, accurate and helpful?

In the field of political science, for example, consider that prized concept of “union,” so passionately discussed, debated and cherished during the turbulent birth of our nation. You probably still remember these famous words you once learned in elementary school: “We the People of the United States, in Order to form a more perfect Union, establish Justice, insure domestic Tranquility, provide for the common defense, promote the general Welfare, and secure the Blessings of Liberty to ourselves and our Posterity, do ordain and establish this Constitution for the United States of America.”

Whether we care to admit it or not, our lives today remain deeply dependent on the existence of a viable political union. On the Fourth of July we celebrate the courage and sacrifices made by thousands of women and men to “form a more perfect union,” but do we have any meaningful understanding today of what that “union” actually is? We all know that some form of compassionately responsive union is essential for our shared experience of justice, tranquility, defense, welfare and liberty, but how can we preserve and maintain it—if we don’t even know what the concept of “union” means?

In India, 5,000 years ago, many people recognized the need to form a “more perfect union”—not just on a political level, but at every level of human endeavor. In fact, they treasured the concept of “union” so highly that they dedicated a great deal of their time and creative energy to examining and experimenting with it. Realizing that the primary motivation behind every desire is for “union,” they developed a science and vocabulary that explained in detail how any person, or any group of people who so desired, could reliably experience “union.”

In the ancient Sanskrit language the word Yoga means “union,” and the science of Yoga is a system of intellectual, spiritual and practical observation and experimentation that leads to the experience of  “union” in every relationship. Here’s how it works.

Second, Yoga Science acknowledges the profound connections between thoughts, words, actions and consequences. The Law of Karma states that thoughts lead to words and actions which inevitably result in specific consequences.

The Law of Karma

If you genuinely desire fulfillment in life, if you want to be happy, healthy and secure, you must choose the thoughts to think, words to speak and actions to take that will lead you to your intended goal of “union.” But that’s easier said than done.

The Mind is the Problem

If the truth be known, each of us lives enslaved to our own habit patterns of likes, dislikes and (often faulty) concepts. Through conscious or unconscious decision-making, we continually create the software of  mind by what we choose to give our attention to and what we choose to withdraw our attention from. In other words, our habit patterns make us think the same things, say the same things and do the same things, with few exceptions, every day. Too often, this process brings us more division than “union.”

It is the mind and its unconscious, limiting habits that is the real cause of physical, mental and emotional dis-ease. Unless we can unite our outer actions with our own Inner Wisdom, we simply cannot see the possibilities available to us when an action is required. We tend to behave like racehorses that run around the track with blinkers on. We get around the track all right, and we might look successful, but, in truth, we’re leaving a universe of rewarding possibilities unobserved, unexplored and unexperienced.

Our minds become habituated to serving familiar and attractive thoughts, desires, emotions and concepts. In the process, individual enslavement to fear, anger and the self-willed desires that conflict with our own Inner Wisdom cause physical and mental dis-ease. Every cell, every individual organ, every bodily system—the cardiovascular, digestive, respiratory, neurological and reproductive systems, are all affected. That inner mental conflict of the individual is also reflected outward in the collective form of our political “union.”

The Mind is the Solution

Between 150BC and 400AD, the sage Patanjali codified the ancient oral tradition of Yoga Science. The very first instruction in his Yoga Sutras states that, “All Yoga, all ‘union,’ begins with an understanding and coordination of the functions of the mind.” His words were an introduction to a systematic regulating, parenting and mastering of the mind functions that leads to “union.”

The following diagram [on page 10] illustrates the method Patanjali used in teaching his students how to establish “union” by coordinating the four functions of the mind.

The hub of the wheel is the Eternal Witness or soul, and it represents our awareness or consciousness. It is self-existent and not dependent on the body or the mind for its existence. The hub (consciousness) never moves, but it is the cause and the power of the mind, and the mind ultimately animates the body. Once speech and action of the body take place, consequences develop.

The four functions of the mind, viewed as spokes of the wheel, are: manas (active mind), ahamkara (ego or I-maker), chitta (the unconscious, storehouse of impressions or samskaras) and buddhi (intellect, discrimination). 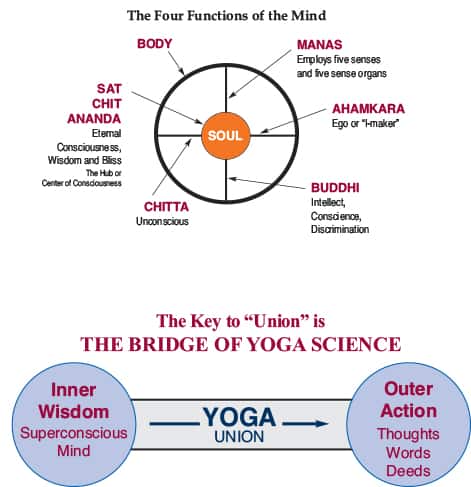 The word manas comes from the Sanskrit root man, which means mind. Manas operates both internally and externally; it is an importer and exporter of information. As we relate to each thought, desire, emotion and concept, we constantly face the decision of whether or not to take an action. Toward that end, the manas collects various bits of pertinent information from the external world and from the other functions of the mind, organizes the data and presents it to our awareness.

In order to collect information from the external world, the manas employs five senses and sense organs: sight (eyes), smell (nose), hearing (ears), taste (mouth) and touch (hands, feet and skin). These employees are constantly going out into the material world and bringing back information about the multitude of objects with which there exists potential for a relationship. The knowledge from this perspective is always limited.

The manas also collects and organizes data from the ego. This information can be valid and useful, but its inherent bias of dividing everything into pleasant or unpleasant, good or bad can be problematic. Left undisciplined, the unruly ego continually reinforces a human being’s alienation from the experience of true “union.” Because the ego has only a limited perspective, it is often wrong—even though it is never in doubt.

As the manas debates whether or not to take an action, information retrieved from the unconscious portion of the mind (chitta) is added to the various suggestions of the ego and senses. The chitta is analogous to a computer’s hard drive—a reservoir of all our habit patterns and the storehouse of information defined as useful in fulfilling our desires. The unconscious mind, like the senses and ego, operates from a rather limited perspective because many of its habits and concepts are faulty.

After the manas concludes its monologue on alternatives and consequences, it waits a bit for our decision. Without a decision, manas repeats again and again, “You have two choices: A or B. Will you do it or will you not do it? A or B? A or B? A or B?”

The relentless repetition becomes first annoying, then frustrating, and eventually, exhausting. The doubt and indecision play on like a broken record, and our inability or unwillingness to make a decision based on the available information is a major cause of stress that depresses both the mind, and the body’s immune system.

The conscience (buddhi) is the only mind function that can discriminate and decide. Functioning like a mirror, the conscience has the capacity to reflect Perfect wisdom from the superconscious portion of the mind. The superconscious mind lies beyond the conscious and unconscious minds. It is the same portion of mind from where Albert Einstein saw mathematical equations and Paul McCartney hears beautiful melodies. Of all the functions of the mind, the buddhi alone has access to the Inner Wisdom that will know what is to be done and what is not to be done in every relationship.

Coordinating the Functions of the Mind

As Yoga scientists, before we try to skillfully coordinate the functions of the mind in a personal experiment to experience the benefits of “union,” let’s step back a moment to review four important points. 1. Our nation’s founders believed that forming a more perfect “union” was a vital requisite to experiencing justice, tranquility, defense, welfare and liberty. 2. The Law of Karma states that consequences flow from our thoughts, words and deeds. 3. Patanjali taught that, “All Yoga, all “union,” begins with an understanding and coordination of the mind. 4. The buddhi or conscience is the only function of the mind that can provide a faultless path to “union” by reflecting Perfect wisdom from the superconscious mind.

What Do I Really Desire?

If we honestly desire the benefits of “union,” we need to parent the ego, senses and unconscious mind to defer to the wise and good counsel of the conscience (buddhi). Only when we skillfully coordinate the four mind functions in this manner can we transcend the painful limitations of the animal mind-body-sense complex and experience a “more perfect union” in every circumstance.

In March, 1775, a group of patriots convened at St. John’s Church in Richmond, Virginia to hear Patrick Henry urge his fellow citizens to choose the high road to “union.” “They tell us that we are weak, unable to cope. But when shall we be stronger? Will it be the next week or the next year? Shall we gather strength by irresolution and inaction—by lying supinely on our backs hugging the delusive phantom of hope—until our enemies shall have bound us hand and foot? Sir, we are not weak—if we make a proper use of those means which the God of Nature has placed in our power.”

The Truth is that the “God of Nature” Patrick Henry spoke of has already provided us the means for “union.” By coordinating the functions of the mind, our personal Bridge of Yoga will not only unite our outer actions with our Inner Wisdom, it will breathe new life into our gridlocked political “union.”

Are we less patriotic today than those who walked this sacred land 240 years ago? Are we not willing to commit our mind, action and speech to forming “a more perfect union?” And if not, at what cost?

Yoga means union. It is a philosophical and scientific bridge uniting your Inner Wisdom with your words and actions in the world. Through the daily practice of AMI MEDITATION, you can learn to skillfully construct, utilize and maintain the Bridge of Yoga in your life. As you coordinate the four functions of the mind and employ the Bridge of Yoga, the debilitating power of fear, anger, self-willed desires and faulty concepts can be transformed into expansive reserves of positive energy, will power and creativity. The Bridge of Yoga coordinates the mind, body and spirit and facilitates “the most perfect union.” It can enable you—and the nation—to experience freedom from fear, pain, misery and bondage.