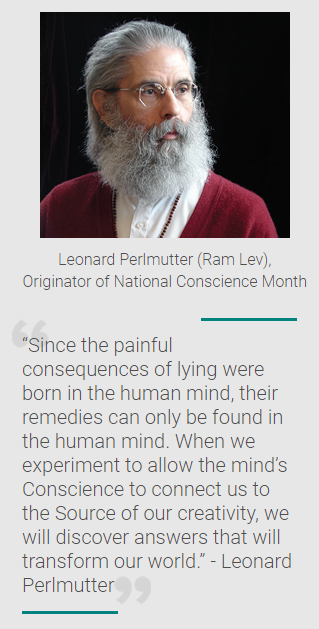 AVERILL PARK, NY,  JANUARY 18, 2022 — During the 3rd annual National Conscience Month observance at The American Meditation Institute, Yoga Scientist and Yoga Psychologist Leonard Perlmutter announced that by coordinating the Four Functions of the Mind to support the wisdom reflected by the Conscience, pathological and compulsive lying and their far-reaching forms of pain can be significantly diminished. Perlmutter’s findings are the result of his 45 years of scientific observation and experimentation with the mind.

Why do people wittingly or unwittingly choose to lie? Leonard Perlmutter explains that, “When fear and a sense of lack are in control of the mind, human beings will lie to get what they want and to keep what they already have.” Even though it’s certainly not an attractive aspect of our humanity, Perlmutter concluded, “If we’re absolutely honest […] 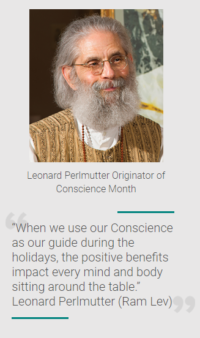 New Book Predicts: Coordinating the Four Functions of the Human Mind Can Resolve All Conflicts and Suffering

AVERILL PARK, NY,  NOVEMBER 02, 2021 — According to Leonard Perlmutter, author of the new book, YOUR CONSCIENCE, humanity possesses the innate creative potential to resolve all political, social, racial and economic conflicts and suffering. […]

Author Perlmutter: 98 Percent of the People Are Blind, and Your Conscience Is the Cure

AVERILL PARK, NY,  OCTOBER 05, 2021 — According to Leonard Perlmutter, originator of National Conscience Month and author of the new book, YOUR CONSCIENCE, most of us regularly become blind to the Truth […]

New Book Warns: Systemic Crisis in Education Causes Pain that Only Enlightened Use of “Your Conscience” Can Resolve

AVERILL PARK, NY , SEPTEMBER 07, 2021 — YOUR CONSCIENCE, a new book by Leonard Perlmutter, internationally recognized authority on the nature of Yoga Science as Mind/Body Medicine, calls for […]

AVERILL PARK, N.Y. OCTOBER 06, 2020 — The American Meditation Institute (AMI) announces that the 2nd annual National Conscience Month will be observed throughout the month of January, 2021. The mission of this observance is to remind and […]

AVERILL PARK, N.Y., Mar. 10, 2020 — The nation’s only comprehensive training in Yoga Science and meditation as holistic […]

The American Meditation Institute today announced three winners of the first-ever National Conscience Month scholarship contest. High school students competed for the scholarships by submitting original artistic creations inspired by their personal use or non-use of their conscience.

AVERILL PARK, N.Y., Jan. 28, 2020 — Offering attendees the opportunity to rediscover their love of medicine and life,

The first-ever National Conscience Month is being launched January 1, 2020 by The American Meditation Institute (AMI), a non-profit organization devoted to providing comprehensive training in Yoga Science—the world’s oldest holistic mind/body medicine. With the mission of encouraging individuals across […]

The American Meditation Institute has announced a special free screening of the movie “Peaceful Warrior” to be followed by an engaging discussion about the importance of using your Conscience as your guide for a healthy, happy, and productive life. […]

Leonard Perlmutter: Today’s March of Cultural Violence can be Halted Only when People Learn Meditation Skills to Transform their Own Character, Conduct and Consciousness